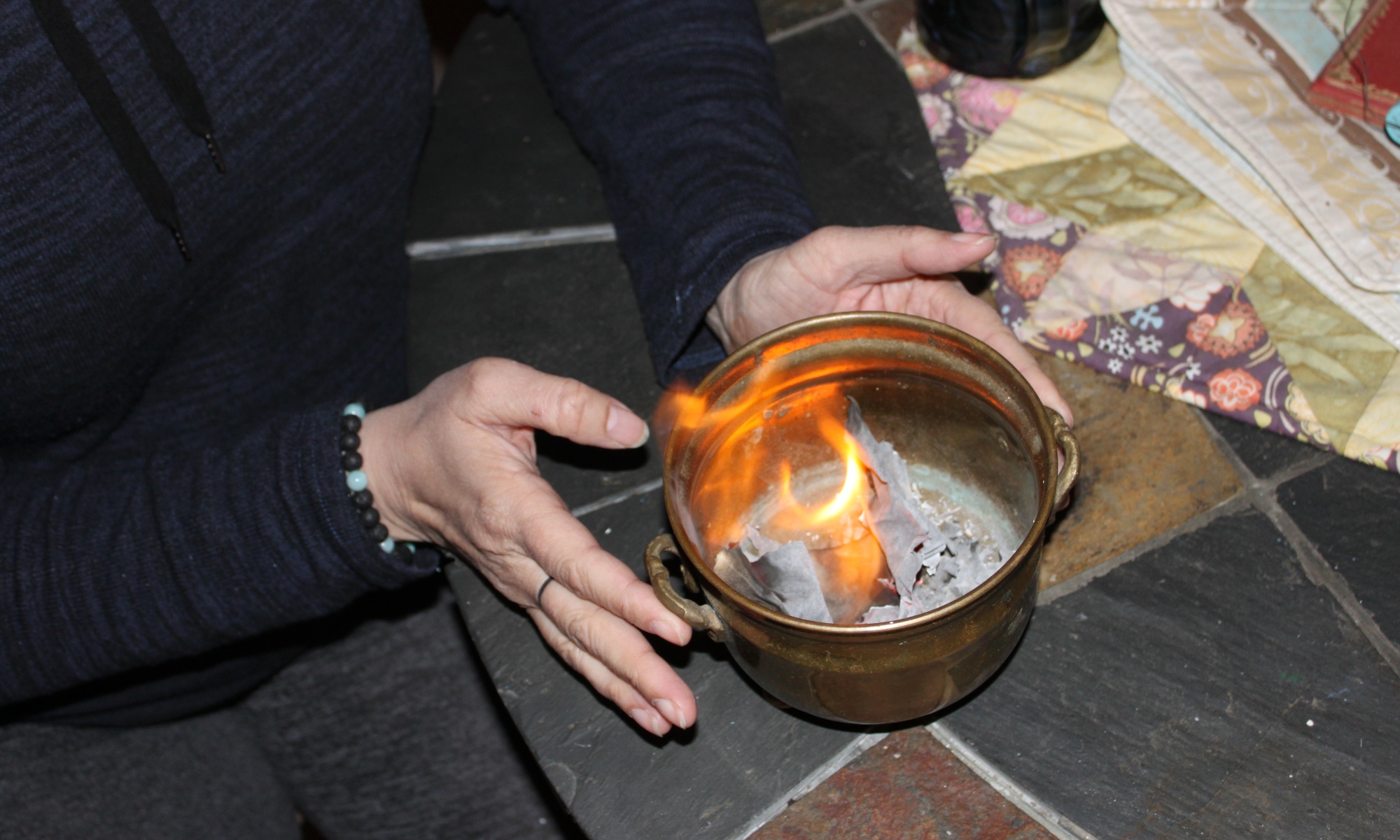 “This is what rituals are for. We do spiritual ceremonies as human beings in order to create a safe resting place for our most complicated feelings of joy or trauma, so that we don’t have to haul those feelings around with us forever, weighing us down. We all need such places of ritual safekeeping. And I do believe that if your culture or tradition doesn’t have the specific ritual you are craving, then you are absolutely permitted to make up a ceremony of your own devising, fixing your own broken-down emotional systems with all the do-it-yourself resourcefulness of a generous plumber/poet.”  – Elizabeth Gilbert

Although fire can be destructive when not controlled, it can also be incredibly cleansing.  Back in my days as a teacher, I taught a class of teenage boys who were having a hard time in school due to problems with their behaviours not being conducive to a learning environment.  Many of them were also labeled as having a learning disability in addition to a behavior hurdle to overcome.  I was a brand new teacher at the time and this assignment was very daunting to my 29 year old self.  At first, I did what teachers do.  I taught curriculum and hoped they would learn it.  I tried creative ways, used videos, tried to think out of the box in the hope that something would spark a flame.  However, none of my ideas seemed to work.  I spent most of my time dealing with figurative fires that needed to be put out.   Stopping fights, trying to get through the day without having to suspend students and relying on Advil at the end of the day to deal with my headaches of frustration.   About 2 months into the year, I knew I had to figure out some other way to get through the  year for my students and my own sanity.  I scheduled one to one meetings with each of my students and asked them many questions.  When did schooling start to go bad for them?  What did they think would help in the classroom?  Why were they so angry?  I found out a wealth of information  from my students although it was not what I was expecting.

Most of the things they talked about were events that had happened in their distant past.  Some with teachers, some with family members some with people in their community.  I began to realize that they were holding on to all of this stuff from the past that was weighing them down.  They couldn’t even hear or begin to listen to what I was trying to teach them in class because they were so bogged down with ghosts from the past telling them they couldn’t do it, they weren’t good enough or the feeling of not being supported.  I then gave all of my students journals.  They were absolutely not happy about these books.  Writing for most of them was scary because they were always reminded in school of their poor spelling, lacking proper grammar and sentence structure.  For this journal, I let them know they would not be “marked.”  I wouldn’t even read them unless they let me.  All I wanted was for the first 15 minutes of everyday, for them to write about all of the things that had happened to them in their lives that they were still holding on to.  With that they bought in to it.  That and the fact that when one student asked if they could swear in the book I replied yes.  They were sold.  I had 2 bins at the front of the class.  After we wrote, they could choose to put their journal in a bin that said “Please Read”  or one that said “Private. Don’t Read.”  At first, most journals went in to the “Private” bin.  Over time though, the opposite bin started to fill up.  I read their journals.  They were heart wrenching stories that gave me so much insight into why these students were having such a rough time.  However, I knew they needed to let these things go to move on in their lives in school and the rest of their lifetime.

One day at the start of summer, I told all my students to grab their journals and we were going outside.  I took them all out to the basketball tarmac in the back of the school and told them we were done with the journal project.  They had put all of their baggage into them and it was time to let them go.  There was really no opposition to this fact from them.  Especially when I said we were going to light them on fire and let them go.  The only condition was that once they had let them go, I didn’t want to hear about them anymore.  They had to really release them.  With them all agreeing to that condition, we burned their journals in a large metal garbage can I had brought outside.  It was such a lovely ceremony, other that the fact that I was reprimanded by my principal for lighting fires in the school yard without permission.  Oops.  From that point on, very rarely did students mention their old baggage and when they did other students would tell them, “You let that go in the fire!”  and they would quickly stop the conversation.  I definitely know that that group of boys released some serious stuff that year in their journal project.

Fast forward many years later.  As I have blogged about in the past, it is often very hard for me at times to let things go from my past.  Past relationships, past emotions, release of control and many more.  I started remembering that cathartic ceremony I had with my students 15 years ago.  Why did I not do that for myself?  What a great way to let go of things that were still lingering in me that no longer served a purpose?  I printed off emails, pages from my journal, and other forms of correspondence and brought them outside.  My husband came with a brought our fire extinguisher.  Although he supports me, safety first. It was such a great way to physically see the burdens go up in smoke.  I definitely can say that I felt such a physical release and slept great that night.  Thank you Jean for reminding me how useful fire can be to let go.  Fire is another ritual that I have found powerful and healing in my life for things that stubbornly hang on.

Wishing you all a healing weekend.  Please feel free to share any rituals you may have found useful in you journey of life.

One Reply to “The Ritual of Fire”

Leave a Reply to One Soul Speaking Cancel reply